Blog › Crypto Market › Market Analytics › What Happens To Bitcoin When All Coins Are Mined?

What Happens To Bitcoin When All Coins Are Mined? 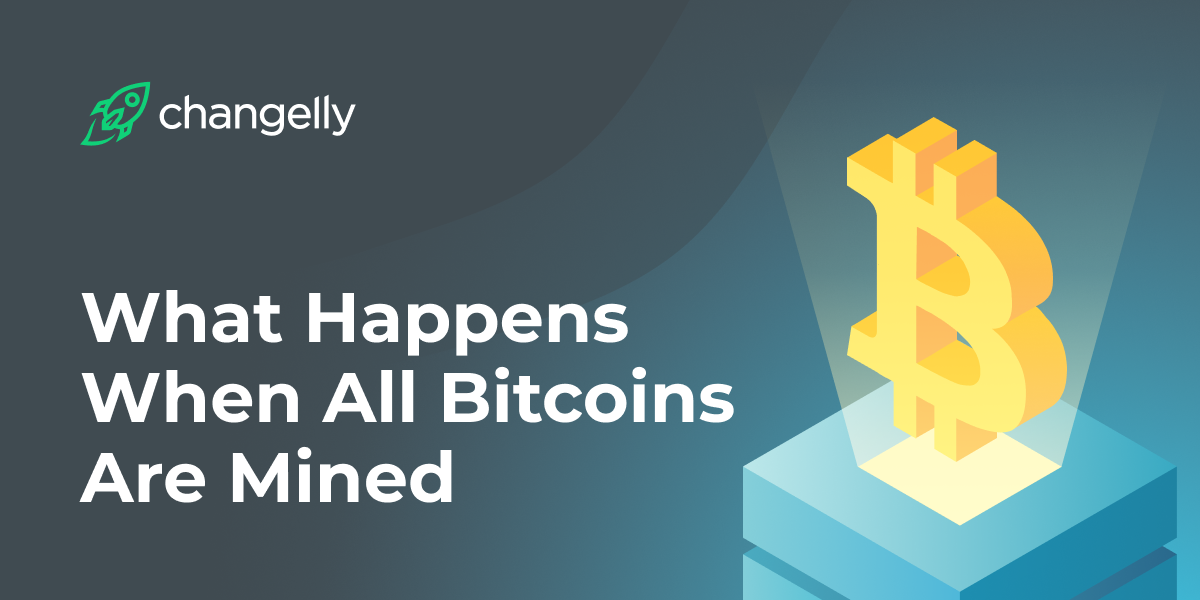 As you know, a total of 21 million bitcoins are available for mining. When all of them are mined, new ones will not appear. Bitcoin is fundamentally different from national currencies. Fiat money supply is constantly growing because the government benefits from inflation. At the same time, it leads to a devaluation of the currency.

In the case of bitcoins, this does not happen. Over time, it should only become more valuable, since the number of new tokens entering the system is constantly decreasing. In addition, the total number of bitcoins is limited to 21 million. What will happen to bitcoin when all the coins are mined? Let’s figure it out.

In order to answer the question, it is important to know the principles of virtual currency mining. A network member receives a bonus for mining Bitcoin cryptocurrency blocks by performing mathematical calculations.

In other words, miners provide available equipment (ASICs, GPU farms) for mining. When closing the next block, a premium is paid. If a network participant works in a pool, he receives only part of the remuneration, taking into account the power transferred to the general network.

Miners not only make money but also maintain the network’s performance. They create chain blocks, add new transactions to them, and check operations for validity. It turns out that mining ensures the functioning of the blockchain. Without miners, the existence of Bitcoin would have been impossible.

What Happens After All Bitcoins Are Mined

About every four years, the number of bitcoins that reward the mining of the next block is halved. At first, it was 50 bitcoins, then 25, and then 12.5. In 2020, it will already be 6.25 bitcoins. If governments are constantly increasing their money supply, the Bitcoin algorithm works in the opposite way, preventing inflation.

At some point, probably around 2140, the last bitcoin will be mined. However, this does not mean that the network will collapse. In addition to the rewards for computing hashes, miners receive transaction processing fees. Now, these fees are small, about a fraction of a percent. However, as the remuneration for the calculations of new blocks decreases, the fee for processing transactions will grow along with the cost of bitcoin.

These fees should be maintained at a level that continues to give miners motivation. Although new bitcoins will stop to appear, bitcoin miners will still receive money.

BTC Price After All Coins Are Mined

Transaction processing fees should be quite large, which means that the cost of bitcoin should increase. As we have already said, the offer of traditional currencies is not limited in practice, and governments are increasing the money supply. At the same time, the value of each individual monetary unit, for example, a dollar, is reduced.

In the case of Bitcoin, the money supply will grow until 2140. However, since this is a previously described and therefore predictable process, it does not lead to the negative consequences described above. In July 2016, the hash reward was reduced from 25 to 12.5 bitcoins.

In anticipation of this event, the price of bitcoin has increased significantly, from about $450 to $750. Price growth stopped when the premium declined. It can be assumed that when the receipt of new bitcoins decreases by half again, the cryptocurrency price will jump again. The same thing should happen in four next years.

Miners After 21 Million of BTC

Those who mostly suffer from the bitcoin limit are miners. So after 21 million, they will not receive a reward. As mentioned above, mining isn’t only about a process of bringing new coins into the ecosystem, it is also about a way to maintain the decentralized blockchain without a so-called central bank or any administration. If miners leave, the network will probably become centralized or crash.

Nowadays the overall value of cryptocurrency is $217 180 980 909. When the last bitcoin has been produced, miners will presumably participate in the internal work process and have a profit from transaction fees. Currently, fees are very low, but they may increase in the future and work as taxes. Bitcoin will become a closed economy. The value of transaction fees must encourage miners so they will participate without a block reward. However, it is pretty clear that some of them will be forced out of the market.

According to some calculations, the last bitcoin will be mined in 2140. In general, investors and users have nothing to worry about a bitcoin limit, as some specialists believe that after the end of mining, bitcoin will still exist.

The only one thing we know exactly, bitcoin will grow till the end of mining. This is a pre-described process, which is essentially embedded in the bitcoin itself. However, it is crucial to note that cryptocurrency has changed between now and then. Just imagine how much has happened in the cryptocurrency market in just 10 years. These and some further events may impact the future of mining. So it is pretty hard to predict the future.

You actually revealed that wonderfully. [url=https://acyclovir-buy.com/]aciclovir[/url]

Many thanks, Loads of knowledge!
[url=https://acyclovir-buy.com/]acyclovir 800 mg[/url]