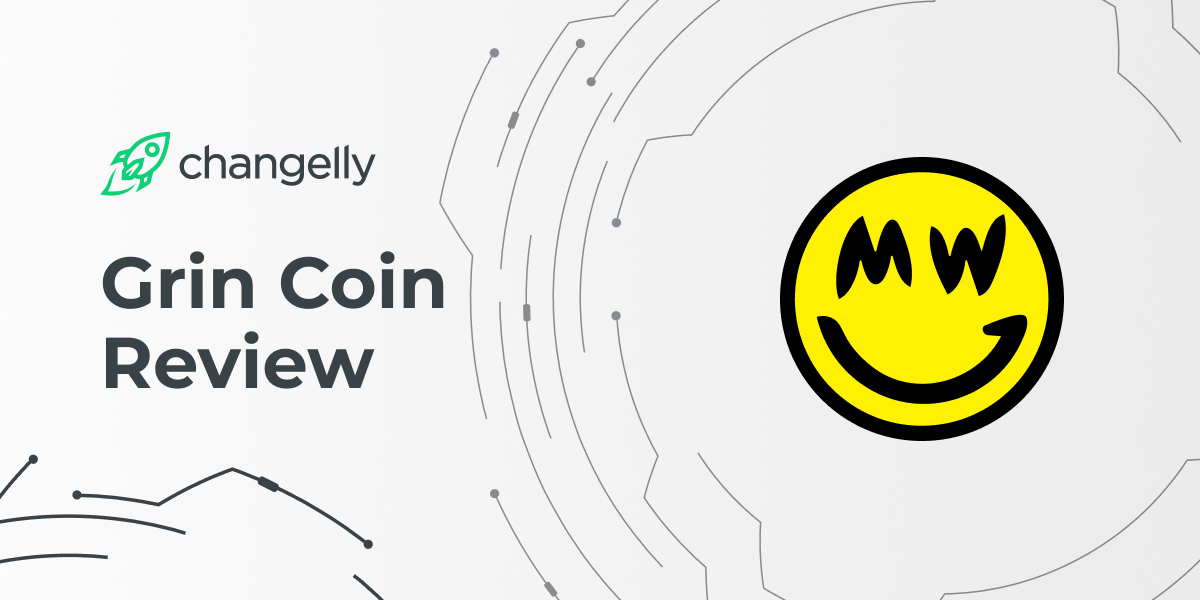 Appearing at the beginning of this year, the anonymous cryptocurrency Grin has immediately gained popularity, almost instantly overshadowing the competition.

Many still don’t understand where all the hype around Grin came from and what is so revolutionary about this project. We will try to figure it out in this article.

The story of the appearance of Grin is somewhat similar to that of popular altcoins Zcash and Dash. They all appeared as a proposal to scale the Bitcoin network. However, due to the complexity of the implementation, it was decided to launch a separate cryptocurrency.

Back in 2016, an unknown developer introduced the White Paper of the protocol to improve privacy and scale the MimbleWimble bitcoin network. He called himself Tom Elvis Jedusor (the pseudonym of Lord Voldemort in the French version of Harry Potter), hence the name of the protocol itself – in the Harry Potter universe MimbleWimble is a spell that prevents the victim from speaking.

The author of MimbleWimble remained unknown and has simply vanished into thin air. However, most of the developers of Grin are anonymous, and it is possible that he is among them and that he just does not advertise it.

The idea of the French Voldemort was picked up by other developers and they decided to create a separate cryptocurrency on the MimbleWimble protocol. They worked on it for more than two years, which can be attributed both to the complexity of the protocol itself and to the lack of funds for development: there was no ICO to launch Grin, and it does not have a premine or a mining award for developers.

The leading trading platform for GRIN is the Hotbit exchange. The main mining pool is F2pool, which is easily connected to it (at the end of January, together with SparkPool, it controlled about 70% of the network hashrate).

An essential feature of the project is complete openness. It does not belong to any established company, and all of its participants initially worked on Grin solely on the principles of volunteering.

Since the launch took place without a presale, an ICO or a premine, three leading developers of the project are currently receiving salaries, the funds for which are collected in the form of donations from the community.

Two of them are known on GitHub under the pseudonyms Ignotus Peverell and Antioch Peverell, which are the names of characters from the Harry Potter universe.

The third developer (his name is unrelated to the book universe of J.K. Rowling) is Michael Cordner, better known by his nickname Yeastplume, a programmer with 20 years of experience in the gaming industry and fraud detection systems.

According to data from GitHub, a total of 125 people took part in the work on the project in different periods. However, only six people worked on it for a long time. The rest contributed to the project from time to time, mainly in the form of improving small sections of code.

The Grin system is a secure and utterly anonymous blockchain with verified transactions, in which there is no information about addresses and the amounts.

In the Grin blockchain, the amount of calculations accompanying the transfer of funds is minimized. The addresses of user wallets and transaction amounts are transmitted in the form of ordinary text messages by a random workaround between peers and are not stored in history.

The Grin block looks like one significant transaction of something from anywhere to nowhere; all the information about which available in the explorer is essential of no value to the observer.

Some consider this feature a significant drawback. However, this gives a guarantee that the Grin blockchain will not grow as fast as Bitcoin and will forever remain quick and easy.

The Grin consensus mechanism is called the Cuckoo Cycle. It is based on Proof-of-Interest. This algorithm was chosen to eliminate the hardware race and make the new anonymous blockchain resistant to ASIC mining.

Thanks to the Cuckoo Cycle, the extraction of Grin coins is possible not only using video cards but also processors. Another feature of this algorithm is the resistance to cracking by quantum computing.

An increased level of confidentiality in the Grin network is achieved through the use of the Dandelion protocol, which provides an improved method for distributing transactional messages. They are similar to standard https requests.

You can find out more about Grin cryptocurrency technical details here.

New Grin coins are mined using the PoW (Proof-of-Work) mining algorithm. The creation of new blocks occurs at an interval of 1 minute and a reward of 60 tokens. An important feature that distinguishes GRIN from most other cryptocurrency projects is the fact that the issue of coins is not limited.

The mining software proposed by the developers of Grin (GrinMiner) can be used on Linux (x86/64) and OSX operating systems. The installation and configuration process is described in detail in the corresponding section on MimbleWimble on GitHub. All actions are performed using commands in the terminal, which will not be particularly tricky for experienced miners. However, it can be difficult for beginners.

Mining on the CPU is also possible. In this case, the process of extracting new coins is much slower than on the GPU.

Recommended requirements for comfortable and cost-effective mining of Grin cryptocurrency is a video card with at least 4 GB of fast DRAM. Devices with 8 or more GB of memory are best suited.

You can also use GrinGoldMiner, an alternative Grin mining software from an unofficial developer that offers support for Linux and Windows 7. To use it, you need a video card with at least 6 GB of memory.

You can mine the cryptocurrency in Grin mining pools:

Immediately after the launch of the Grin cryptocurrency, the cost of the coin was $25 (on January 17th). However, in just 3 days, the price decreased tenfold, dropping to $2.5.

This price behavior is quite standard for new coins that are just starting to be traded on cryptocurrency exchanges. In the case of GRIN, such a sharp price decline can also be explained by the activity of miners, who began to merge easily mined first coins on the market.

Until January 27th, the cost of the new cryptocurrency grew rapidly against the background of the started info-hype around the project and listings on a number of exchanges, reaching the level of $13.7. Then the price of Grin dropped to $5, and it remained at this level until February 20th.

Today, the price has consolidated at the level of $2-3. So far the charts do not show obvious signs or hints of possible future growth. Moreover, this price corridor is maintained only due to the rise in the price of Bitcoin, since the trend for the GRIN/BTC pair is steadily bearish.

The only indicator that Grin cryptocurrency is steadily growing is its market capitalization, which increases due to the daily arrival of approx. 85 thousand mined coins on the market, currently being equal to $32,604,822 million.

Where to Trade Grin Coin

There is quite a wide range of exchanges where you can trade GRIN coin. Here are the most popular pairs:

Where to Store Grin Coin

Only the wallets recommended by the developers should be used in order to store purchased or mined coins:

To conclude, the Grin cryptocurrency is an exciting blockchain project. In the long term, it will undoubtedly find its application as an innovative payment solution. Despite having direct competition in the less-advertised cryptocurrency Beam, which is also an implementation of the MimbleWimble protocol, Grin has every chance of becoming the leader of a new generation of anonymous cryptocurrencies.

When it comes to the prospects of investing in GRIN, everything is very ambiguous. For now, this is just a profit coin for miners. It is not worth allocating a significant part of your portfolio to it, primarily due to the mentioned risks of depreciation.

There is visibly a lot to know about this. I assume you made various nice points in features also.