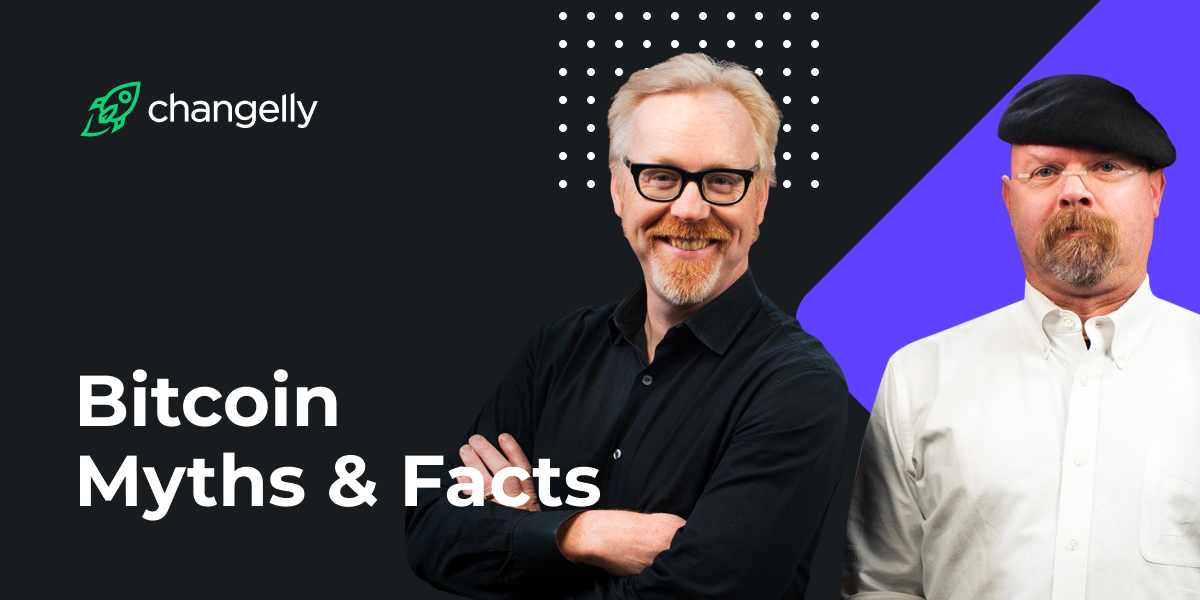 The cryptocurrency industry originates from Bitcoin, the main coin of the market that has been operating for more than eleven years. During this time, it managed to acquire a huge number of guesses and theories that really scare people away from investing in crypts and do not allow beginners to even think about investments. Today we will dispel the ten most popular myths about the main cryptocurrency.

Many people hesitate to buy cryptocurrency, as they consider it too expensive. They look at the price and think that they have already missed their train with potential profit. As for 23rd April, the cryptocurrency exchange rate is $ $7,096.

You can always buy part of a Bitcoin coin. Each Bitcoin is made up of hundreds of millions of indivisible parts called Satoshi. You can buy at least one satoshi – 0.00000001 Bitcoin. For about $50 it is quite possible to buy more than 700 thousand satoshis or 0.007 bitcoins. This amount is much more real. You can even afford to lose it.

Less than 15 percent of Americans and less than 1 percent of all people in the world own the main cryptocurrency. If its capitalization continues to grow and reaches the level of gold capitalization, the value of BTC can grow at least 25 times.

In this scenario, f you are now investing a hundred dollars in crypto, after a few years, this investment can increase to 2500 dollars. So it’s not too late to think about buying coins.

If you are already interested in buying Bitcoin, or a small piece of it, you can always do it via Changelly. We provide the best and fixed rates.

Most people do not realize that when they pay for a cup of coffee with a credit card, the money from their account does not immediately go to the seller’s account. The payment system counts the digital debt obligation, which may remain open months after the transaction.

With the development of technologies such as the Lightning Network, the Bitcoin blockchain can also process relatively large transaction flows in seconds.

News headlines about hacking another major cryptocurrency exchange will scare anyone away from the industry. Bitcoin has never been hacked.

The system created by Satoshi Nakamoto is safer than any bank in the world. If BTC will be stored on your hardware wallet, even with physical access to the device, attackers are unlikely to be able to withdraw bitcoins themselves.

Bitcoin cannot be faked. New coins are issued according to a strictly predefined protocol schedule, which absolutely no one can break. Bitcoin is almost impossible to close. As long as at least one miner is active on the network, the system will continue to live.

#7. Bitcoin Will Outperform Another Cryptocurrency

Bitcoin is not quite the first of its kind. Before his appearance, there were attempts to create something similar. The first analog of cryptocurrency could appear back in the nineties of the previous century. All these projects failed due to problems with centralization and security.

After Bitcoin first became the focus of public attention, many developers began to create their own cryptocurrencies. At the same time, they promised that the new coins would be better and faster than Bitcoin. Until today, no other coin has managed to occupy a dominant place in the industry.

#6. Bitcoin Is Bad for the Environment

Critics argue that as the number of miners grows, the network’s demand for electricity grows. Most of it is produced at harmful thermal power plants.

In 2019, researchers from the University of New Mexico published a report on the impact of Bitcoin on the environment. Cryptocurrency really does contribute to the release of harmful substances into the Earth’s atmosphere.

Bitcoin is not an incentive for electricity providers to increase their momentum. Just surpluses of previously not consumed resources, which one way or another would have been worked out in vain, including those used to power the Bitcoin network.

In 2017, cryptocurrency in a short period of time grew almost 20 times, reaching a historic maximum of $20 thousand. Then, at almost the same rate, the BTC price fell below $6,000.

In traditional markets, such sharp ups and downs in the value of an asset are called bubbles. Usually, after the formation of a bubble, the asset becomes cheaper for a long time and hangs at the bottom. Bitcoin managed to win almost all of its positions. Last year, the coin went up to 14 thousand dollars before a new fall.

On a relatively small scale, these sharp price movements really look like bubbles. In fact, Bitcoin is in a very long growth phase. Ten years ago, cryptocurrency cost almost nothing, but now they are ready to give thousands of dollars for it.

Bitcoin is based on a deflation mechanism: every year for everyone who wants to buy coins, there is less BTC, so the price of cryptocurrency is growing in the long term. Traditional currencies can depreciate as much as you like. Especially against the backdrop of recent events in the world.

In February 2018, it became known that the Government of India will tighten control over the circulation of cryptocurrencies. The bans were indeed introduced. Already in March 2020, the Central Bank of India officially allowed cooperation between commercial banks and cryptocurrency firms.

Resistance to the spread of crypts brings practically no advantages for the state. Industry support has a positive effect on the economy. One of the factors in Japan’s GDP growth in 2017 was the adoption of Bitcoin.

#3. Bitcoin Cannot Exist Without the Internet

The size of Bitcoin transactions allows you to transfer them even using radio waves and satellites. All you need is an antenna at 7 MHz and 40 m and the JS8call application.

#2. Bitcoin Is Popular Only in the Darknet

Criminals are among the first to master new technologies: the Internet and wire transfers. In the beginning, many people really bought Bitcoin to spend it on illegal goods or services. Over time, the ecosystem has grown, and now only 1 percent of transactions are related to illegal activities.

The main users of the crypto are traders who speculate with it on exchanges. There are large companies, hedge funds, and even entire cryptocurrency banks in the industry.

#1. Bitcoin Has No Value

As many people think, cryptocurrency can not be used or somehow physically used. The real value of Bitcoin supposedly should be zero.

Following this logic, banknotes in your wallet also cost absolutely nothing. When the US dollar moved away from the gold standard in 1971, money ceased to be supported by gold. In fact, this allowed central banks to create new money from the air. After the abolition of the gold standard, dollar inflation only increased.

Bitcoin is really not backed up by anything. The maximum number of cryptocurrency coins is limited. It can not be created forever.

Bitcoin cannot be uncontrollably printed by central banks, censored or confiscated. It has no borders and is not controlled by any state. Bitcoin gives everyone equal access and does not discriminate on the basis of geographical location, age, gender, or religion.

Read to the end? Now you understand that investing in Bitcoin is not such a crazy idea. Go to Changelly and buy Bitcoin with your card (Mastercard and Visa accepted).