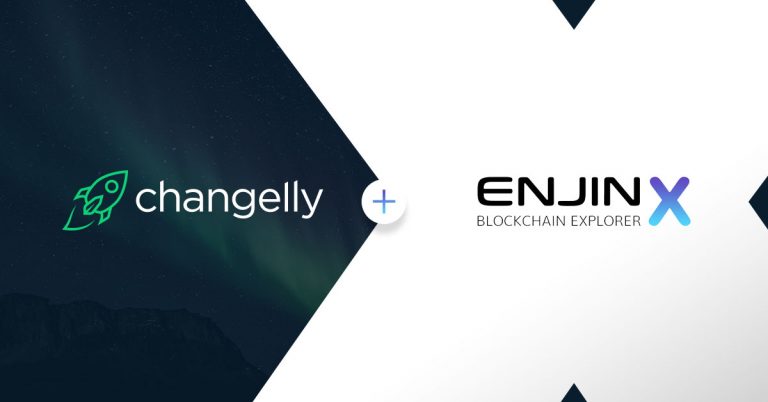 The next milestone of Changelly and Enjin collaboration was the creation of EnjinX blockchain explorer exclusively customized for Changelly.

What is Blockchain Explorer

What is EnjinX Customizable Ad-Free Explorer

EnjinX is a user-friendly blockchain explorer for Ethereum and ERC-20 tokens that aims to support other popular blockchains soon to become the first universal web application. With EnjinX anyone can search transaction, addresses, blocks, and coins within seconds. There are more options that positively contrast to other explorers namely multilingualism, ad-free and super handy interface.

Changelly branded blockchain explorer powered by Enjin team is available at https://changelly.enjinx.io/. The direct link will now be added to the final step of Changelly exchange procedure for all transactions to ETH and soon to be added to ERC-20 tokens too. By clicking the link, a user will access the explorer web page with his transaction data.

Enjin team is devoted to adding Bitcoin, ERC-1155, ERC-721, Litecoin & Dogecoin support later this year, making it useless to switch between many other different explorers.

“I’m fascinated by the pace of Enjin teamwork and I’m looking forward to having more blockchains supported by the explorer which becomes an integral part of our ecosystem not just from the branding perspective, but also from the user’s experience. With more than 140+ cryptocurrencies offered by Changelly, our customers would like to have all related data presented in one easily accessible place,” –

“We at Changelly are very selective in choosing partners. Each partnership for us is not a one-time action aimed at fueling the interest of the crypto community, but long-term teamwork that may lead to expanding the functionality and product line of both companies. In this context, our partnership with Enjin is a unique example of such kind of collaboration. Starting with the integration of the instant exchange feature inside the Enjin wallet, we extended our business relationship with the branded blockchain explorer powered by EnjinX team. Such a fruitful partnership drives the industry forward and speeds up the cryptocurrency mass adoption around the globe.”

Enjin is a leading blockchain ecosystem developer. Enjin builds a suite of user-first blockchain products that enable anyone to easily create, manage, trade, store, explore, distribute, and integrate blockchain assets. Built on top of a robust on-chain infrastructure, and comprised of the Enjin Platform, Explorer, Wallet, Beam, and other tools and services, the Enjin ecosystem empowers gamers with true ownership of digital assets and enables game industry businesses to increase revenue, gain a competitive edge, and innovate in previously impossible ways. Forged in gaming, Enjin’s tools and services can also be used by companies of all sizes and industries seeking to create blockchain-powered products or utilize tokenized digital assets as part of their acquisition, retention, engagement, and monetization strategies. The Enjin ecosystem is fueled by Enjin Coin (ENJ), an Ethereum-based cryptocurrency used to directly back the value of next-generation blockchain assets. Today, there’s millions of ENJ locked in blockchain-based digital assets.

Changelly is a non-custodial instant cryptocurrency exchange. We act as an intermediary between crypto exchanges and users, offering access to 130+ cryptocurrencies. The company mission is making an exchange process effortless for everyone who wants to invest in cryptocurrency. Operating since 2015, the platform and its mobile app attract over a million visitors monthly who enjoy high limits, fast transactions, and 24/7 live support.

Changelly offers its API and a customizable widget to any crypto service that wishes to broaden its audience and implement new exchange options. Changelly partners with MyEtherWallet, Exodus, Binance, BRD, Edge, Coinomi, Trezor, Ledger, Enjin, Coinpayments, Huobi Wallet and other well-known players in the crypto industry.