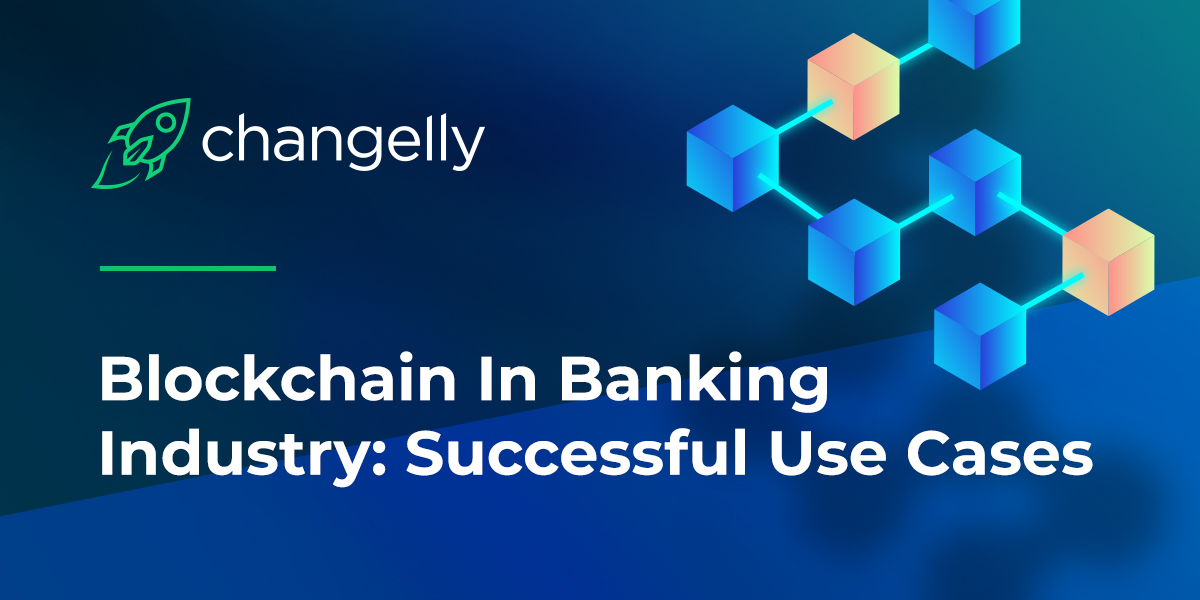 Being a truly revolutionary technology, blockchain is being steadily implemented in all spheres of our life starting from food tracking and finishing by online payments. Of course, cryptocurrency will surely disrupt the modern economical system to some extent, but the influence of blockchain on the global banking sphere is not confined by tokens only.

Blockchain is very perspective for traditional banks, and the companies realizing it have already implemented it. How did they introduce blockchain into the current ecosystem, and what are the benefits of distributed ledger?

This article covers successful use cases and explains the benefits for banks using blockchain.

What is Blockchain Technology?

Blockchain is a distributed database where storage devices are not connected to one common server. Instead, such database stores an ever-growing list of records called ‘blocks’. Each block contains a timestamp and a link to the previous block.

Use of encryption guarantees that users can change only those parts of the blockchain that they “own. Owners have private keys without which writing to the file is impossible. In addition, encryption provides synchronization of copies of a distributed blockchain for all users.

Blockchain technology originally incorporated security at the database level. The concept of blockchains was proposed in 2008 by Satoshi Nakamoto. It was first implemented in 2009 as a component of the Bitcoin digital currency where the blockchain plays the role of the main common registry for all operations. Thanks to blockchain technology, Bitcoin has become the first digital currency that solves the problem of double expenses without using a central server.

How Does Blockchain Work?

Everyone can post information on the Internet, and then other people can access it from anywhere in the world. Blockchain allows you to send any values ​​to any point in the world where the blockchain file will be available. By providing your private key to someone, you essentially transfer to that person a sum of money, which is stored in the corresponding section of the blockchain.

Aside from helping users to perform a quick and safe transaction, blockchains establish trust and serve for authentication of identity, because no one can change the chain of blocks without the corresponding keys.

Blockchain is a breakthrough technology that has enormous potential for the whole gamut of spheres, but it’s actually used by companies in healthcare, government, transportation, technology, manufacturing, entertainment, gaming, and so on.

Since blockchain serves to perform any kind of transaction (transfer of data, ownership right, currency, etc), the spheres of application are not limited. As you see, blockchain proves to be useful in various sectors. Today, public companies using blockchain include Facebook, Alibaba Group, Microsoft, Siemens, Ford Motor Company, and so on.

Before we enlist the banks implementing distributed ledger, let’s find out what are the benefits of blockchain in banking:

German bank Commerzbank and LBBW conducted the first test transactions on the blockchain platform for trade financing Marco Polo. As you can see from the press release, the deals involved financing the supply of products from the leading pump and valve manufacturer KSB SE for the technology company Voith.

The details of the order and delivery of the products were agreed between the companies through the Marco Polo infrastructure, and the bank of the purchasing company provided a conditional payment commitment. After the product was shipped, the relevant shipment information was entered into the blockchain system, where reconciliation with previously reached agreements was automatically carried out.

After reconciliation, the payment process was started. Thus, the complexity and laboriousness of the process of exchanging information and trade finance were significantly reduced while maintaining the security of the transaction.

Future plans are related to the implementation of transactions entirely on the Marco Polo platform, for which it is planned to integrate with client ERP systems, as well as to join transport and insurance companies to Marco Polo, which will expand the available range of services. The Swiss bank UBS will lead a pilot project whose goal is to automate the regulatory requirements of the EU directive regulating exchange operations MiFID II / MiFIR, which will come into force in 2018.

Using the system created on the basis of the Ethereum blockchain platform, banks will be able to anonymously exchange Legal Entity Identifier data. The technology also allows to verify their data on legal entities and adopt new rules faster.

In 2018, UBS invested $100 mln to develop a crypto bank. Being called SEBA Crypto AG, this startup is dedicated to offering traditional banking services to companies in the crypto sphere. It provides:

It’s not surprising that a Swiss blockchain project has become so successful – Switzerland legislature does not prohibit cryptocurrencies or development of blockchain. It’s a perfect place for launching new financial services.

John Hunter, the head of the clearing unit of the financial holding JPMorgan & Chase said that the functionality of Interbank Information Network (IIN), system for cross-border payments, is based on the Quorum blockchain, and will be significantly expanded.

Their pilot project in partnership with the Australian ANZ and Royal Bank of Canada started in the fall of 2017. Back then, the developers focused on IIN applications in the field of legal compliance in cross-border transfers, but now they intend to use the potential of the technology in the calculation procedure.

In particular, participating banks will be able to track the payments in real time. IIN is already used by more than 220 banks, and 75 institutions are testing it (such companies include Societe Generale and Santander).

Before that,  JPMorgan introduced its own JPM Coin stablecoin for international corporate payments, transfer of securities and replacement of dollars that are in the bank’s vault.

Starting from 2019, the blockchain division of the ING Dutch bank has been testing the technology for ensuring confidentiality and increasing the productivity of the Bulletproofs network. ING believes that the technology can help banks comply with the requirements of the European General Data Protection Regulation (GDPR) and protect the privacy of customers.

Bulletproofs was developed by cryptographers at Stanford University and University College London together with Blocksteam startup.

Over the course of the year, the Dutch bank explored ZKP solutions, including Range Proofs and the Zero-Knowledge Set Membership. But they revealed that ZKP require a lot of computation and therefore can slow down the blockchain. According to Mariana Gomez de la Villa, global head of ING blockchain programs, Bulletproofs are “about ten times faster” than other similar solutions.

Most of the research is still academic, but the bank is now looking for the possibility of implementing this privacy technology. The development of ZKP solutions at ING has also not stopped, and is currently considering their use in trade finance.

In April 2018, Banco Santander has announced the launch of Santander One Pay FX, a new blockchain service using Ripple’s xCurrent technology to accelerate the processing of international money transfers. Initially, customers from the UK were able to send Euros to 21 European countries. Customers from Spain were able to transfer dollars to the US and pounds to the UK. The services were also available for users from Poland and other countries.

In February 2019, Santander entered a $700 mln deal with IBM to use their technologies (blockchain, artificial intelligence, and big data).

Bank of America and blockchain: the ice is thawing?

The relationship of Bank of America (BofA) and blockchain have been complicated: the bank representatives explained that the company is being skeptical about the technology. Despite having a huge amount of patents, BofA did not hurry to take steps to the implementation of the distributed ledger.

However, recently, Bank of America blockchain position was changed. The crypto community noticed it registered a patent called “Real-Time Net Settlement by Distributed Ledger System”. In this case, they test the technology of Ripple. And it’s not surprising – Ripple’s XRP is created specifically for the banking sphere. The rumor goes that the bank will implement ’Ripple without XRP’, but its representatives refused to give any comments.

Keeping up with the times, both Visa and Mastercard also implement blockchain technologies. For example, Mastercard owns up to 30 Blockchain-related patents connected with identity verification, anonymous transactions, and a system that links cryptocurrency with a fiat account. Besides, they also plan to solve the problem of credit card ‘skimming’ using the blockchain technology.

In June 2017, Mastercard launched a blockchain program that allows developers to create applications on their API. Besides, Mastercard also presented the proof of provenance algorithm: it can make the supply chain more transparent for users, and will be ideal in logistics, food and all industries connected with the supply of goods. When it comes to Visa, it uses blockchain to establish stricter control over transactions. In 2016, it started testing the BTL payment platform for cross-border payments. Evidently, the test showed the efficiency of blockchain payment, so they moved on with other experiments.  Now, the company partners with IBM to create an Ethereum-based payment system. It also uses Hyperledger Fabitc to perform all basic operations with maximum safety.

It’s not a secret that some blockchain-based financial startups also offer their own banking cards that can be used for everyday payments and cash withdrawal in ATMs. Wirex and Revoult are among the leading crypto projects providing such cards.

Here’s a breakdown of their peculiarities:

The number of companies using blockchain technology is steadily growing. The following industry leaders are implementing it:

Companies Based on Blockchain Technology

There are hundreds of interesting companies that use blockchain, and some of them have become so popular they were included in Forbes Fintech 50. Such blockchain technology companies include:

As you see, the benefits of using distributed ledger technology in banking are not theoretical – many banking companies have already performed testing and implemented blockchain payments into their infrastructure.

Undoubtedly, smaller banks will soon follow the path of pioneers and, who knows, maybe in some ten years, every transaction made on Earth will be processed by blockchains.