BitShares is a decentralized blockchain-based platform that facilitates asset exchange and enables users to turn their real-world assets into digital ones. The network provides an outstanding level of stability, scalability, and liquidity of assets. BitShares gives users an opportunity to create their own customized tokens tied to non-digital assets through smarts contracts. According to some crypto community enthusiasts, BitShares is one of the most accomplished decentralized trading platforms on the market.

In this article, we’ll talk about BitShares origins, its team, and its blockchain, discuss the BitShares coin, where to store it, and how to buy, sell, and trade it. We’ll also point out BitShares strong suits and disadvantages, discover the project’s roadmap and try to figure out its future in the crypto industry.

The project was launched in June 2013 by a software programmer and a crypto entrepreneur Daniel Larimer, who is also known to be the developer behind the Delegated Proof of Stake consensus algorithm and the Graphene blockchain technology. BitShares originated as a platform for shares of virtual companies (it was called ProtoShares at the time). Later it accommodated other kinds of assets, such as gold, national currencies, digital coins, etc.

As for the people responsible for the BitShares development, the platform doesn’t have a fixed team of developers: there are a number of freelancers from all over the world working on the project. All the network upgrades have to get shareholders’ approval before being implemented. Dan Larimer left the project in mid-2016 but didn’t cut his ties with the project, remaining the public face of the BitShares platform in the eyes of the broader audience.

Another prominent figure of the crypto community, Charles Hoskinson (the co-creator of Ethereum), also participated in the BitShare platform development. Experienced devs, analysts, and crypto geeks like Ned Scott, Annemieke Dirks, Ronald Kramer, Stan Larimer, and Fabian Shuh, among others, worked on the creation and development of the network.

Basically, BitShares is an exchange and open-source public financial platform. It can be compared to the New York Stock Exchange or other real-world exchanges; the only difference is that BitShares has no centralized authority in place and is blockchain-based.

BitShares blockchain is powered by the BTS coin and runs on the Delegated Proof of Stake consensus algorithm. It means that the stakeholders delegate the right to vote to the third party. The more a holder stakes, the bigger is their voting power. In DPoS, validator’s reputation is of great significance: if a node works inefficiently or tries to cheat, it is excluded and replaced by another node. There is a limited amount of validator nodes, and the BitShares coin holders vote for those nodes to be chosen.

In this ecosystem, the nodes are called “witnesses”. They process and validate the transactions on the holder’s behalf and get rewarded for their efforts. At all times, there are not less than 11 witnesses on the network, but normally more than that – 20 or 50. Shareholders decide the exact amount of validator nodes by voting.

If you want to know more about the Delegated Proof of Stake algorithm, check out our detailed article on the PoS Consensus Mechanism.

The platform adopted Graphene, an open-source blockchain implementation that offers great scalability and impressive operational speed. BitShares blockchain claims to be able to process up to 100.000 transactions per second, which is more than Visa and MasterCard payment systems offer combined.

A new block is generated every three seconds on the BitShares blockchain. The block reward equals 1 BTS, which gives validators 1200 BTS per hour.

BitShares is famous for fighting the crypto volatility problem. So, how does BitShares blockchain help to produce stable digital assets? Here comes the project’s know-how: the BitShares network converts real-world assets into buckets of bitshares.

For instance, 1 BitARS (Argentinian peso) equals a certain amount of Bitshares at a price that makes up 1 full ARS. This way, it doesn’t really matter what the Bitshares price is or used to be. Every time we need to know the exact price in BTS, it is recalculated according to the current market situation. The same is true for BitGold, BitSilver, BitUSD, etc.

This mechanism inspires confidence in digital merchants because they can be sure that 1 BitARS will cost as much the next day as the day they were converted. Bitshares price can vary, but a certain amount of BTS coins will always constitute the initial value of the asset.

The BitShares ecosystem allows the transformation of almost all real-world assets into bitshares: users can convert fiat currencies, companies’ shares, gold, silver, other precious metals, digital coins, deposit receipts, etc. All these assets can be made digital property and recorded on the BitShares blockchain.

Blockchain parameters, such as block time, block confirmation time, and some others, are set by a special committee. BTS holders vote for those elected individuals or businesses. They also make decisions on the business plan of the blockchain, revenue streams, blockchain tweak costs, etc. The committee is different from the shareholders.

The BTS coins mainly serve as a means of transforming real-world assets to digital property. Depending on the type of asset, the system distinguishes smartcoins and user-issued assets. The former are privatized-stable cryptocurrencies, the latter reflects any other assets that users issue through the BTS coin.

BitShares cryptocurrency can not be mined because it runs on the Delegated Proof of Stake consensus algorithm instead of the Proof of Work algorithm. Users can stake BTS by electing witnesses to confirm blocks. The BitShares crypto can also be used as a collateral, making it a kind of a security token. To learn more on the matter, read a Changelly article on Security Tokens.

Where to Store BitShares Coins

The best way to store BTS is DAX, or BitShares’ very own Decentralized Asset Exchange platform. It is an official BitShares wallet. Besides the web version, the platform has a desktop version compatible with Windows, MacOS, and Linux-based operating systems. It is often called BitShares Light Wallet; you can download it from this github page. There is also an official mobile app, but it is available only for Android-based devices.

This wallet has three types of keys: owner, active, and memo. Each of them has a private key and a public key. The wallet has a unique account name and is well-protected. Multiple accounts can be registered in one wallet, but a user has to gain LTM (lifetime membership) access in order to do that. It is possible to make backups and restore your wallet with any type of membership access.

The BitShares wallet doesn’t require any account permissions and is integrated into the exchange platform. It facilitates trading and offers a number of features, or tools. Those tools enable users to vote for witnesses, stake, participate in the life of the BitShares community, check all kinds of statistics on the coin, and get info on operational fees and BitShare blockchain activity. It also allows you to send and receive assets. The wallet can be used anonymously and is a secure option for storing your BTS coins.

Where to Trade BitShares Coins

On the crypto market, there are other digital coins that give importance to bits and pieces. Learn about another cryptocurrency that made bits its know-how technology in our article on BitTorrent Cryptocurrency.

This platform is indeed a veteran among digital exchanges: since it was founded in 2013, BitShares has provided financial services to crypto users non-stop. It matured and became stable together with the world crypto community, and the project’s achievements, as well as an overall contribution to the industry, are hard to deny. 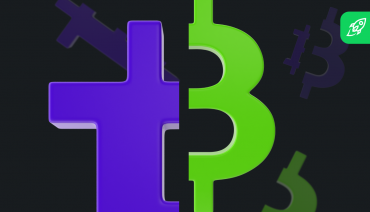 Bitcoin halving: What does it mean and what will its effect be?

However, BitShares hasn’t quite reached the point where it becomes the “real deal” of digital trading platforms. Partly it can be attributed to its weak marketing promotion. The platform lacks vision and doesn’t offer any particular message to the crypto audience. While the technical side of the project works brilliantly, the social aspect sags down.

The BitShares website doesn’t represent the brand or tell people any particular story. It mostly serves as a technical hub for devs and other savvy crowds. There is no roadmap available to the public, so it is hard to say where the BitShares project is going. The future of the platform is unclear and is defined by its shareholders for the most part, though the BitShares users community is huge and still dedicated to the project.

Let’s review some of the strong suits and weaknesses of the BitShares platform.

BitShares is a decentralized digital trading platform that allows users to convert their real-world assets into digital property and trade them online. It was founded in 2013 by Daniel Larimer. The team of developers working on the project mainly consists of freelancers.

The platform appears to be similar to real-world stock exchanges, except that it runs on a blockchain and is decentralized. BitShares is built on the Delegated Proof of Stake consensus algorithm. Validator nodes are called witnesses and are voted for by the BTS holders. The witnesses get rewarded 1 BTS every 3 seconds.

The BitShares network uses Graphene blockchain implementation, which can allegedly boost its transaction speed to 100.000 TPS. The platform provides stability of users’ digital assets by forming buckets of bitshares. It means that 1 EUR is transformed into 1 BitEUR without losing the value. The amount of bitshares needed to constitute 1 BitEUR is recalculated according to the market. The ecosystem also works with precious metals, cryptocurrencies, any national currencies, stock, etc.

BTS is the native token of the platform. It is used to digitize material assets, vote for witnesses, and pay transaction fees, but also as collateral. You can store BTS on the BitShares DAX, which is an official BitShares wallet. There are many in-build tools on this platform, including trading, staking, voting, statistics, and more. It is a good idea to trade BTS on the BitShares exchange, but there are other options, too, for instance, Binance and Huobi exchanges.