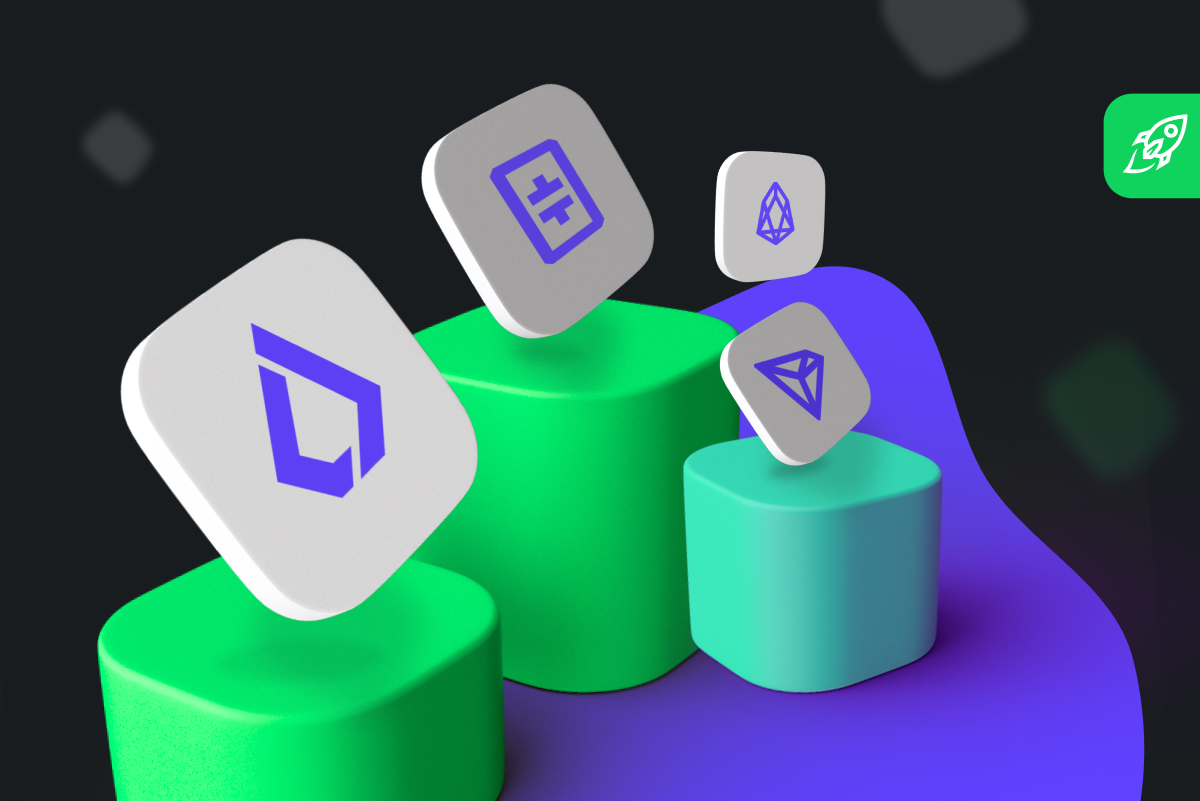 In traditional PoW algorithms, miners provide the hash power of their machines to protect and support blockchain networks. The work of miners is rewarded with coins for finding new blocks. However, such a process is not always profitable, especially considering the low price of some cryptocurrencies and the high cost of electricity and mining equipment.

This is why staking has become the most affordable and profitable type of mining for average crypto holders. It is used for cryptocurrencies that function on a Proof of Stake consensus algorithm (rate confirmation). Staking assumes that users store their tokens in a wallet, which is used to protect the network, verify transactions, and create new blocks. Just like with the Proof of Work algorithm, when new blocks are found, stakers receive a reward for participating in this process.

Over the past year, the popularity of staking has been increasing since it takes a little effort to set up, and makes it easy to receive passive income. If you still want to do mining instead of staking, check out a Changelly article on Bitcoin Hardware for Mining.

An alternative consensus mechanism, Proof of Stake, was first implemented in 2012 in PPCoin cryptocurrency (now known as PeerCoin). Sunny King and Scott Nadal co-wrote the first paper on the new algorithm. The main idea behind it was to use a “stake” as a resource that determines which particular node gets the right to mine the next block.

In the Proof of Stake approach, the nodes also try to hash data in search of a result less than a certain value. In this case, the complexity is distributed proportionally in accordance with the balance of the node. In other words, according to the number of coins (tokens) stored on the user’s account.

Thus, a node with a greater balance is more likely to generate the next block. Such an approach looks quite attractive primarily because of minimal requirements to computing resources, and also because no capacities are wasted.

The PoS algorithm has the following advantages:

Launched in September 2014, Tezos is a Swiss open-source blockchain platform for assets and apps. It uses the Liquid Proof of Stake algorithm and is positioned as the network protocol for safe and tested smart contract systems.

In order to become a Tezos validator, you need to freeze a certain amount of XTZ in your wallet. Early on, the stake was 10.000 XTZ, but a while ago, the Tezos community voted to lower the stake, and now freezing 8.000 XTZ is enough. However, the ecosystem also provides users with a possibility of delegation – any number of your own coins can be entrusted to a miner. The current annual revenue is about 5.5%: XTZ is one of the top staking coins.

Decred is an autonomous digital currency with a hybrid consensus system. The cryptocurrency uses both Proof-of-Work and Proof-of-Stake mechanisms, which reduces centralization and makes the blockchain more secure. PoW miners receive a portion of a 60% block reward, and PoS DCR ticket holders – 30%. The remaining 10% are transferred to the project’s treasury.

You need to have at least 138 DCR coins in your wallet to initiate staking and keep them locked up for 28 days. The annual profit of DCR holders reaches 6.9%.

Synthetix is a protocol that facilitates synthetic assets trade on a blockchain, for instance, USD, BTC, gold, stocks, etc. It works on the Ethereum platform and is powered by Synthetix Network Token (SNX). The project enables users to turn real-world assets into ERC20 tokens that equal the assets in price and then trade them in the digital world.

SNX holders can participate in minting the coin by locking up their assets into a smart contract as collateral. Staking rewards are paid weekly. The annual reward for this cryptocurrency staking is 47.2%.

The Algorand project aims to establish a free digital economy, scalable, decentralized, and safe. It is based on the Algorand blockchain and uses ALGO as its native token. Algorand is known for its extremely low transaction fees. The ecosystem is built on a peculiar algorithm called Pure Proof-of-Stake: the coin can be staked, but there is no delegation mechanism in place, and the consensus can be reached without any central authority.

Users can hold as little as 1 ALGO in their wallet to start staking cryptocurrency. They get rewards with each created block. As of September 2020, the yearly reward for ALGO staking is around 5.3%.

Icon is often called a “crypto network of networks”. This project was established in 2017 in South Korea with an ambitious purpose of creating a digital nation, an infrastructure for users to make their own cryptocurrencies and economies. The Icon blockchain works on ICX coin and unites five crucial parts of the ecosystem: the Icon Republic, the Icon Communities, Community Representatives, Community Nodes, and Citizen Nodes.

As it is built on the Delegated Proof of Stake algorithm, the ICX holders choose nodes that are allowed to add new blocks. Staking Icon can bring you up to 11.7% interest annually.

The Tron platform was created in 2017 as a digital alternative to the real-world entertainment industry. The Tron ecosystem uses the Delegated Proof of Stake algorithm, as well as dApps and smart contracts. Transaction validation is done by 27 super representatives that rotate in order to maintain a fair system. A block reward equals 16 TRX and is given every three seconds (the time that it takes for a new block to be generated). The annual reward for TRX staking is about 3.3% but may be higher.

Earning interest on staking Tron coins can be a profitable endeavor even for beginner crypto holders. To learn more about Tronix staking, read our Staking Tron Guide.

Crypto experts often say that the NEO project is the Chinese Ethereum. The algorithm behind it is called Delegated Byzantine Fault Tolerance.

NEO differs from other cryptocurrencies by its indivisibility – it cannot be divided into parts less than 1 NEO. The “fuel” model is also used in the form of GAS tokens – when the next block is found, 7 GAS are automatically distributed among NEO holders. The current passive revenue from staking cryptocurrency NEO is about 1% per year.

The launch of the Cosmos Hub took place in March 2019 after three years of hard work. The project is designed to ensure the compatibility of different blockchains (primarily Ethereum and Bitcoin). Cosmos is also called “internet of blockchain” in the crypto community: it always prioritizes the networks it fosters and provides an ecosystem for data sharing with no central authority in place.

Cosmos runs on the Byzantine Fault Tolerance algorithm, which is a type of Proof-of-Stake algorithm. The top 100 nodes that stake ATOM become validator nodes. Your position on the list of the nodes depends on how many ATOM coins you have in your wallet. Cosmos network validators receive additional ATOM tokens for securing the blockchain by staking their tokens. Cosmos is considered to be one of the best staking coins: the current annual staking revenue is estimated at around 9%.

Ontology is a blockchain platform for businesses that want secure and straightforward access to digital tools. Companies and projects can build their own blockchains on the Ontology mainchain and use smart contracts. The ONT coin powers the whole system. Staking coins like Ontology is fairly easy: you’ll need just 500 ONT to start.

In October 2019, Gate.io exchange implemented Ontology cryptocurrency staking (ONT) in its new program called “HODL & Earn”. Gate.io users can make deposits in ONT to receive around 3% of profit per year. The rate of return depends on the number of ONTs stored during the past 14 days. Dividends are accrued every two weeks.

Loom is a digital network that allows decentralized applications to run on its sidechains. It is based on the Ethereum blockchain and uses the Delegated Proof of Stake consensus algorithm. LOOM is the network’s native token that secures the mainnet.

Loom staking has been available since 2019, but it is still not an easy process. LOOM is not compatible with many wallets: you’ll have to use Metamask, Ledger, or Trezor to store it. You’d also have to buy some Ethereum gas in order to cover the transaction cost. Read our article on Ethereum Gas if you want to know more about Ethereum transaction fees.

Users can earn from 5% to 20% interest on LOOM staking, depending on the staking period.

Fusion is a blockchain-based ecosystem for financial transactions. It was created to help businesses deal with their day-to-day financial and administrative operations. The platform is powered by the FSN token that has a 46.78 million total supply.

Users can stake Fusion on an exchange, with a pool, or by running a Fusion node. Staking on an exchange means that you’ll have to lock in your FSN coins at least for a month. If you want an effortless staking experience, you can do it with a pool: they will charge you a small fee but take all the remaining work upon themselves.

Staking through a Fusion node will require 5000 FSN and basic technical skills to set up the node. Staking this crypto will earn you around 24.2% of annual interest.

Fantom is a blockchain network that aims to provide high transaction speed, security, and scalability using the Directed Acyclic Graph technology. The platform has an ambitious goal of delivering digital infrastructure to so-called smart cities that work on smart contracts and dApps. Fantom uses the Proof of Stake consensus algorithm to validate transactions and is powered by FTM token.

The Fantom platform allows you to earn staking rewards by securing the network. FTM holders can stake from their phones or personal computers, no sophisticated hardware is required. The FTM coins have to be transferred to a PWA wallet, then moved to an opera address, and, finally, entrusted to a reputable validator. Fantom is one of the best staking coins in 2020: at the time of writing, the annual reward for staking it is 26.8%.

Staking has become popular among crypto holders over the last few years. It is an effortless and secure way to earn money on digital coins. Users can stake coins that run on the PoS algorithm and its variations. With the Proof of Stake algorithm, the creator of a new block is chosen through a deterministic mechanism: it depends on the node’s wealth, also defined as stake.

If you are not an active trader and don’t want to bear the risk, staking coins will be a great option for you. The reward might range from 3% to 30%, but the best thing about it is that you don’t have to do anything. It is a 100% passive income.