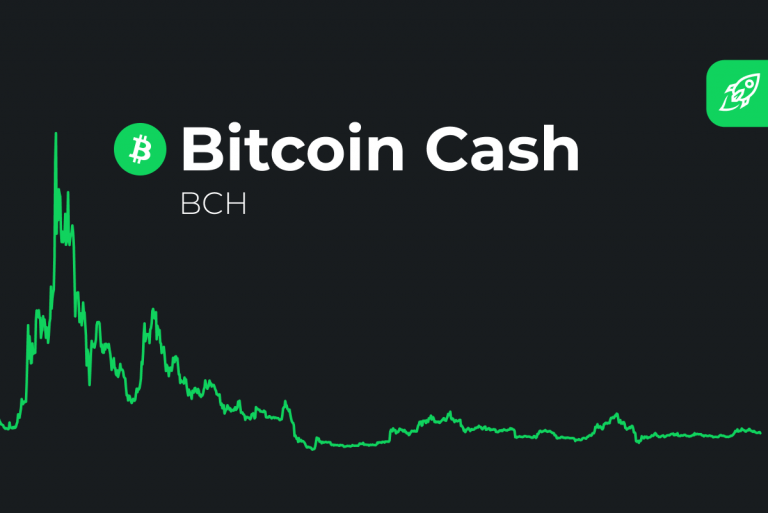 Bitcoin Cash is the most successful fork of Bitcoin (BTC) and one of the most prominent cryptocurrencies in the industry. For a long time, Bitcoin Cash was in the top-3 cryptos in terms of market capitalization alongside Ethereum and Bitcoin.

What is Bitcoin Cash?

Bitcoin Cash is a fork of the first cryptocurrency, Bitcoin. It was designed to provide a more scalable and easy-to-use alternative to the original coin. The coin was established on August 1st, 2017. The coin should’ve become a cryptocurrency suitable for day-to-day transactions. In order to achieve that goal, the block size of the new coin was increased from 1 MB to 8 MB making transactions much faster. The newborn crypto was a success; the Bitcoin Cash price predictions were mostly positive, it was listed on multiple exchanges and became widely used by the community.

Still, BCH price history is not a one of stability. Bitcoin Cash price chart shows that the coin is very volatile in its value and is strongly linked to the overall state of the market. However, the coin is far from being a failure. Its price got to the peak shortly after its creation. On December 20, 2017, one BCH coin had a value of more than 4000 USD. Despite the fact that the BCH price today is significantly lower, the coin is still actively traded on almost every cryptocurrency exchange.

In August 2017, when altcoin first appeared on the market, the price was $200. By the end of the month, the exchange rate rose to $550, with a capitalization of $9 billion. A sharp jump was triggered by the interest of miners and the buying activity of traders. The first transferred power to a more convenient coin for mining. The second hoped to make money on the new bitcoin, in which many saw a real competitor to BTC.

The subsequent correction cut quotes by almost 30%, but already in November, the next phase of growth began. Against the background of the release of official software, listing on top exchanges and the beginning of a bull trend, the price surpassed the mark of $1000. In December 2017, the altcoin reached a historic high of $4,300. Capitalization has exceeded 70 billion.

However, already in January, the correction collapsed to $2600. Then, in a general recession, the rate fell to $700. Only in May, in parallel with the short-term jump in BTC, did it rise briefly to $1000. And then he continued to fall.

After the hard fork and the outbreak of the hashrate war with Bitcoin SV, the downtrend became apparent. In just a few days, the rate fell to $75 (historical low). Capitalization dipped to a billion. Until the spring of 2019, the price ranged in the range of $130-170.

In March, when the market was finally emerging, quotes went up. But the rainbow picture was again ruined by the hard fork. While the developers introduced new protocols to increase the block, a certain anonymous author took advantage of the vulnerability of the system and launched an alternative chain. Which led to double spending, due to which users lost almost 1.5 million dollars. Miners trying to work on the new chain began to open empty blocks. A crash occurred and for some time the system did not work at all.

In order to remedy the situation, two large mining pools – BTC.com and BTC.top – combined the hashrate, carried out a planned attack of 51% and rolled back the system to its previous state. It would seem that they pursued a noble goal. However, the selected methods raised a number of questions among users. How decentralized is the network if two pools can take control?

Amid a general panic, the rate collapsed by 25%. In April BCH price began to rise up to $292. The cryptocurrency continued to grow until the point of $488 by the end of June. Then we saw the downtrend in BCH price. It fell to $176. Now, in 2020, Bitcoin Cash cryptocurrency is still in a downtrend.

At the moment, BCH is the most successful fork of Bitcoin. It is popular among miners, traders and large investors, its technology is used by well-known corporations. A limited issue protects the asset from inflation.

However, three factors play against BCH:

By the way, there are many people who do not believe in BCH and come up with pessimistic Bitcoin Cash price analysis:

Also, let’s not forget the upcoming BCH coin halving that will take place in approximately 150 days. The outcomes are hard to forecast, and some crypto enthusiasts claim that consequences might be catastrophic. That makes up for pessimistic Bitcoin Cash news predictions.

Project developers have disappeared from the media space and are testing Avalanche, a massive update that can take the project to the next level. What improvements can predetermine the increase of the BCH price?

WalletInvestor provides a pessimistic Bitcoin Cash price analysis and claims it is a bad long-term investment. The future BCH price may drop from $307 to $67 by the end of this year. Bitcoin Cash coin won’t replace Bitcoin in the near future, according to the source.

Taking everything into consideration, the BCH rate is associated with the Bitcoin price. So we need to be attentive to BTC price changes. If the price of Bitcoin goes up, then the entire cryptocurrency market can move after it. Many Bitcoin Cash future value predictions claim that Bitcoin Cash is likely to reach $1,000 in the next few years, and if so, it would be very impressive.

By the way, if you are interested in adding BCH cryptocurrency in your portfolio, Changelly is here to offer you the best cross-rates for exchange: