What is POA Network? 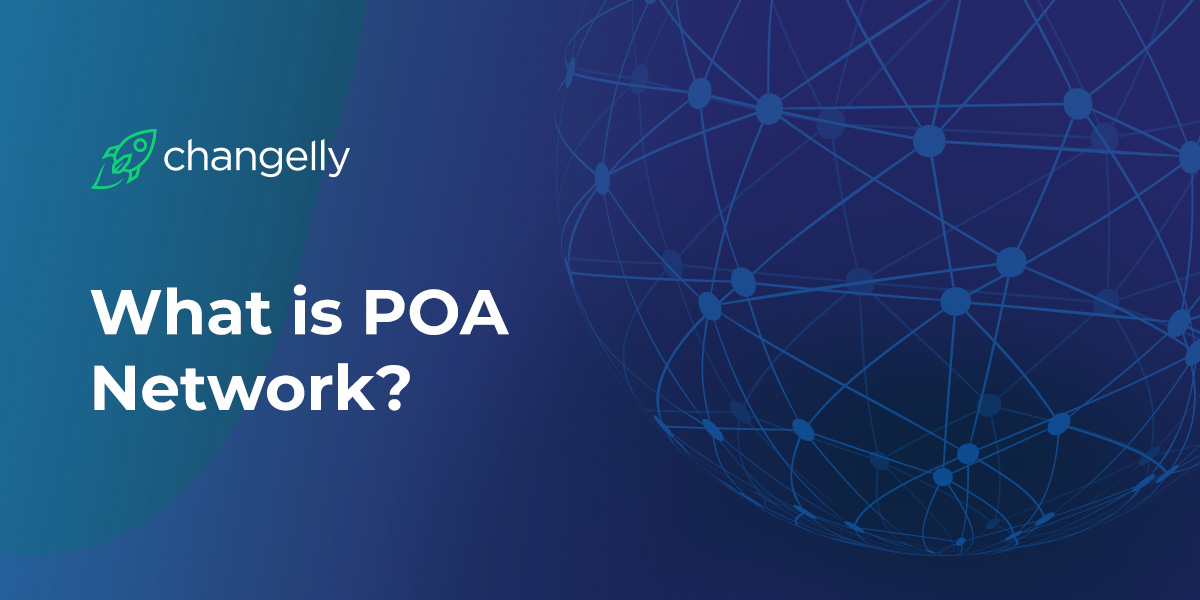 POA Network is an open, public network based on the Ethereum protocol with the Proof of Authority (PoA) consensus obtained by independent pre-selected validators.

Although the Oracles Network is a fork of Ethereum, it is still a separate independent blockchain platform. The main feature of the Oracles Network is their Proof of Authority (POA) consensus mechanism, which can significantly reduce transaction fees and the use of smart contracts, and also ensures fast network operation.

The developers of POA Network determine the relevance of the development of their project with the demand for digital technologies. The network is a solution to the problem that arises when trying to transfer business to blockchain. Let’s explore the POA Network with Changelly!

The idea of Oracle Networks was announced in April 2017. In August 2017, the test network was launched with 12 independent validators.

The POA Network is committed to addressing a key drawback of a blockchain, which is scaling. To solve this problem, the project implements the original idea of ​​a new protocol for achieving consensus.

Proof of Authority is providing high bandwidth of POA Network. The principle of action is the formation of validators based on the confirmation of personal data, which become the key to so-called good faith.

The developers of the POA Network actually implement a masternode system involving real individuals. Becoming a validator, such a user transfers his personal data, which is checked and stored in the system.

All validators must have an active notarial public license in the United States. Because validator identifiers are publicly available, validators are more likely to act in the interests of the network.

The block will be generated with an average time of 5 seconds. Each Oracle network has a current capacity of about 1.5 million transactions per day. A faster network allows you to create new types of applications where the speed of response from distributed consensus is important. Since the Oracles Network is compatible with Ethereum, Ethereum dApps can be easily transported and run on the Oracles Network with faster response times and higher bandwidth.

Network replication is also part of the Oracles network strategy. There can be many network clones (called “Clone Swarm”), each serving a different community.

The Oracles Network also has a cross-chain bridge connecting any Ethereum compatible network. A typical use case would be an ICO project to raise funds from the Ethereum core network when issuing tokens to another, more cost-effective Oracles network. On a large scale, such bridges make it easy to transfer cost between networks.

To recruit the first 12 validators, a ceremonial master was used. It distributed the necessary keys among the first participants. Granting authority to form and verify blocks allowed the launch of a network with a high level of scalability.

A validator generates three keys in the Initial Ceremony DApp:

At the moment, the POA Network has 23 validators.

POA and the Competitors

Just as Ether operates on the Ethereum network, POA coins are used as transaction fees in the Oracles network. It is also used as a reward by validators for network security. POA20 is an ERC20 representation of POA native tokens on Ethereum network. The POA20 token displays the exact same properties as the standard ERC20 token and allows it to be used in all the same places that offer ERC20 compatibility.

The POA token is used for transaction fees within the network and to pay rewards to validators for certifying transactions. The more projects that will be implemented on the basis of the POA Network platform, the higher the cost of the POA token will be.

Initially, the creators of the platform installed a hard cap for the ICO in the amount of $25 million.  However, this amount was halved. The developers did not offer any bonuses and discounts, which did not stop them from collecting the declared $12.5 million on the presale in a record 56 seconds.

All funds in the amount of 41176 ETH were collected on the presale in 58 seconds.

2019 for POA is a development year of increased adoption, improved consensus, and upgraded governance. Let’s highlight some important points:

POA20 token is listed on the Uniswap Exchange! Uniswap is a unique DeFi (decentralized finance) project which allows users to easily swap ERC20 tokens with ETH as well as directly with other listed ERC20 tokens. The protocol design provides inexpensive gas prices and exchange rates which are calculated and regulated through on-chain protocols and trading arbitrage.

POA is supported by a wide range of wallets compatible with Ethereum system. Check it out!

Where to trade POA and POA20 Tokens?

You can buy and trade both POA and POA 20 Tokens. The first table is showing the exchanges that operate with POA token, and the second table is for POA20 tokens.

There are some excellent points in favor of POA Network:

Investing in a POA Network is controversial. On the one hand, the concept is original and in demand, many projects can be transferred from the original broadcast platform to the proposed site.

However, the issue of relevance rests entirely on the development of Ethereum. If it manages to successfully implement the increase in bandwidth, then we should not expect great prospects from the POA Network. Developers in this situation will take considerable time to implement enough innovative ideas into their project and make it competitive.

Disclaimer: This article about POA Network should not be considered as offering trading recommendations. The cryptocurrency market suffers from high volatility and occasional arbitrary movements.