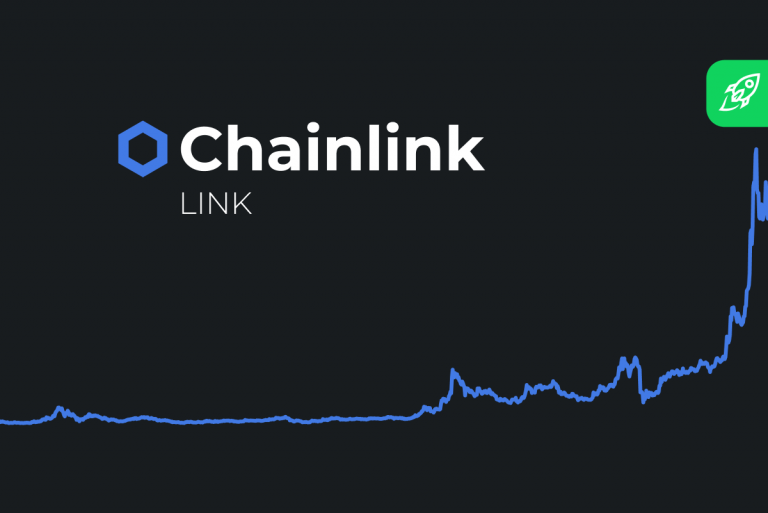 This year, Chainlink broke in the list of top-10 cryptocurrencies by market capitalization. Since the beginning of the year, LINK cryptocurrency price increased by 830% and overtook Bitcoin and other liquid coins by the profitability.

Some experts say that the reason for this burst and success is the demand for such a service. Chainlink became a monopolist on the decentralized oracles market, so their oracles are the industry standard.

Changelly treats Chanilink cryptocurrency with respect since it’s a promising project. By the way, the coin is traded against multiple cryptocurrencies and it is also ready to be swapped to over 150 digital assets on the Changelly platform.

ChainLink (LINK) is an open-source decentralized cryptocurrency. Chainlink technology is based on the software that helps to connect smart contracts to external resources in different networks. This is provided by safe decentralized oracles.

The ICO was conducted on September 19th, 2017, and the $32 million fundraising goal was achieved. Back then, Chainlink ICO price was $0.11 (ETH was accepted as the only means of payment), and the ROI achieved x15 in USD, x26 in ETH, and x6 in BTC.

To enable the mutual integration of cryptocurrency technologies and traditional software of any organization, it is necessary to provide a link between the cryptocurrency infrastructure element and dozens of third-party points. This connection is provided by the oracles, software that forms a kind of channel between the parties to the contract. This channel exchanges data according to the rules that are specified in the contract.

Chainlink has developed a technology that forms such channels between different data providers through the blockchain technology. The team created oracles that ensure the implementation of a smart contract between the crypto infrastructure and third-party sources of information. Such networks are not regulated by anyone or anything other than a smart contract and are essentially decentralized.

The network formed by Chainlink consists of levels:

Chainlink allows all network operators to earn with their own token, named LINK. Participants receive a certain amount of coins as a reward for using smart contracts with ChainLink oracles. One way to become the owner of LINK is to incorporate this network into your business.

Investors can buy LINK cryptocurrency on cryptocurrency exchanges. LINK currency pairs are actively traded on Binance, Bitrue, and Huobi, and ChainLink is also traded on OKEx, FCoin, and many other exchanges. The LINK coin is available for instant purchase at Changelly.

2018 was the year of fall and growth for Chainlink’s price. 2018 started with a major bull run, so many altcoins were at the peak of their price value – LINK wasn’t an exception. Then, a huge downtrend followed, which erased billions of dollars of market cap for many crypto projects.

Not all of them recovered from the bearish period, but Chainlink price got to the previous level. Look at the right side of Chainlink price chart 2018: the rise might be connected with the launch of the first dApps on Chainlink blockchain, and listing on BITBOX and other exchanges.

The Chainlink price reached the peaks twice more this year. On June 29th, LINK got the ATH price of $4.54. The grow was connected with the release of Chainlink on Ethereum mainnet.

Chainlink has one of the biggest communities in the cryptocurrency space. The overall crypto community values Chainlink projects because people see the team working tight-tipped on their project. Look at this tweet:

In July 2020, Unidentified individuals acting on behalf of the British investment bank Zeus Capital have threatened to sue Chainlink (LINK) supporters. Attackers pointed to a short-term collapse of the coin on August 2, when its price dropped by 10% within an hour. A few hours later, quotes soared by 14.7%. On the morning of August 4, the LINK rate reached a historic high at $9.46, adding 12.2% per day.

On July 20, the real Zeus Capital denied any involvement in the creation of the report and stated that there was no connection with the attackers.

Although the crypto market is highly volatile and hasn’t escaped from the bear’s grip yet, the forecast for Chainlink price is highly optimistic. It’s not likely for the coin to dump to $1 level because it has already survived through the worst.

Here’s what people think about it:

Don’t forget that Chainlink is also supposed to be a great long-term investment:

There are several price predictions of Chainlink cryptocurrency which we aggregated and ready to show you.

LINK is an awesome one-year-investment. The Chainlink cryptocurrency price can go up from $11 to $22 in one year. The long-term earning potential is 98% in one year. The ChainLink (LINK ) future price in 2025 will be $65. Well, if the developers improve the project from day to day, the investors will be able to reap the benefits.

#2. Chainlink Price Forecast for the Next 5 Years by Digital Coin Price

What Can Affect Chainlink Crypto Price?

Considering how easily Chainlink overcomes the bearish market, it’s not likely that the coin will lose in price.

When it comes to the reasons for the asset to grow or fall, there are several points. As long as Chainlink will be the only decentralized oracle service, Link cryptocurrency will be in Top-10. Obviously, the Chainlink price growth is connected to the hype of the DeFi sector and FOMO. However, the demand for decentralized oracles is growing.

Anyway, Chainlink can face some obstacles. These are a dependence from Ethereum high fees and the emergence of competitive projects with the greater potential.

Is Chainlink a Good Investment?

Chainlink is still a new cryptocurrency so its price is volatile and depends on the price of Bitcoin.

Nowadays this scenario with LINK crypto is not really possible.

Where And How to Buy Chainlink Crypto?

It is easy to buy LINK coin on many platforms. If you want to buy LINK cryptocurrency anonymously using your credit card (USD, EUR, GBP), you can use the Changelly platform.