Best Cryptocurrency Multi Wallets for iOS to Use in 2021 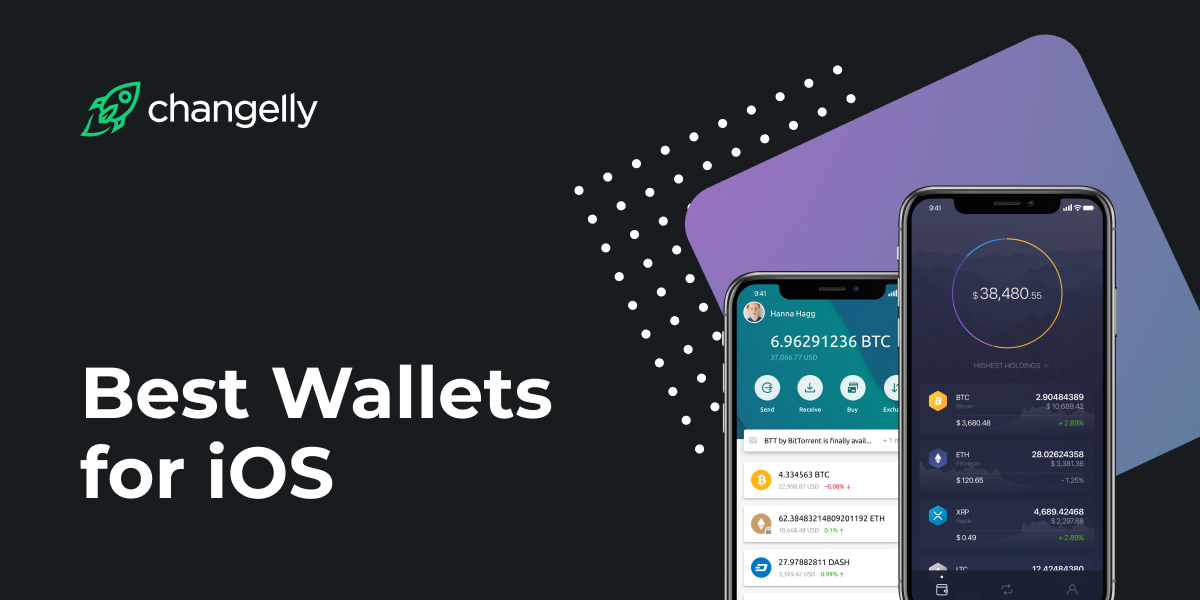 Today the cryptocurrency market is developing significantly because more and more people are interested in crypto. The quantity of new users is growing daily. Thus, some crypto wallets are seeking to simplify interfaces and make themselves user-friendly and safe. So, let’s overview the best cryptocurrency wallets for iOS in 2020.

We’ve collected for you a list of 7 best crypto wallets. If you still have nothing to hodl, we offer you an easy and fast way to buy crypto. Keep reading to find out how.

Coinomi is a multi-chain wallet based in the UK. It was launched in 2014 by blockchain technology experts and it was designed to support a wide number of different crypto coins. Initially, the idea was to create a mobile application that allows you to store funds and provide maximum security.

The team’s mission is to make the wallet accessible for users, so it could support a lot of tokens, coins, and dApps. Coinomi is also popular because of rare coins and tokens listed there.

The main feature of Coinomi apart from many others is zero fees. With this wallet, you do not need to pay fees for sending or receiving coins. The miners ask you to pay fees directly.

Breadwallet (BRD) is a Switzerland based wallet, launched in 2015 as a mobile application. BRD is one of the first bitcoin wallets supported by iOS, and recently Android.

A pleasant thing is that the wallet doesn’t require fees for sending transactions (you will be charged only by the Bitcoin network). This is a fairly simple application with a user-friendly interface, which is also equipped with additional security measures.

However, there are some drawbacks. For example, Breadwallet’s attention is focused mostly on Bitcoin, so it doesn’t provide users with a wide array of coins. Secondly, for some users the wallet might seem not safe enough because of two-factor authentication and multi-signature transactions absence. However, we need to point out that there is nothing to worry about, as BRD is securely protected by a pin code.
Get the latest iOS version for free on Apple’s AppStore.

Exodus is a multi-currency wallet. Supporting a big number of tokens, a wallet has the capacity to swap any crypto directly in the app.

Exodus may attract your attention first of all by its easy and stylish interface, which makes the application available not only for experienced users but also for beginners.

Speaking about security, Exodus encrypts private keys and transaction data only for your eyes, without any registration or verification.

In October 2014 a company called “Airbitz” launched its Bitcoin wallet and only in 3 years “Airbitz” became “Edge”, supporting up to 20 different altcoins. The wallet positions itself as a company aimed to provide secure and private data.

Edge has an in-app exchange. How does it work? The wallet has integrated instant crypto exchange services such as Shapeshift and Changelly. So you can swap one coin to another using their gateway on your device.

The Jaxx project is a modern, popular, multi-currency storage with an excellent reputation. The multipurpose wallet easily allows you to pay, store, and exchange cryptocurrency profitably. Jaxx was created by a Canadian company called Decentral Inc in 2014.

Jaxx can boast a large number of digital currencies such as Bitcoin, Ethereum, Dash, Bitcoin Cash, Litecoin, Ethereum Classic and many more. Moreover, Jaxx is well-known for its easy and user-friendly interface.
Get the latest iOS version for free on Apple’s AppStore.

Freewallet Wallet is an easy-to-use mobile wallet with a built-in cryptocurrency exchange available for iOS and Android.

Among the main features of this wallet there are:

So, Trust is closing our TOP-7 cryptocurrency wallets for iOS in 2020. Trust is another multi-currency wallet for iOS, which was designed for Ethereum and Ethereum-based tokens. It supports such cryptos as Bitcoin, Ethereum, Litecoin, Ripple, Tezos, Ethereum Classic, Bitcoin Cash and many more.

Trust also allows you to interact with decentralized applications straight from the application.
Get the latest iOS version for free on Apple’s AppStore.

Nowadays, the crypto market is able to provide every iOS user with a wide range of different cryptocurrency wallets. We hope this article will help you to choose the one. We advise you to think of the main features that your wallet should be equipped with.