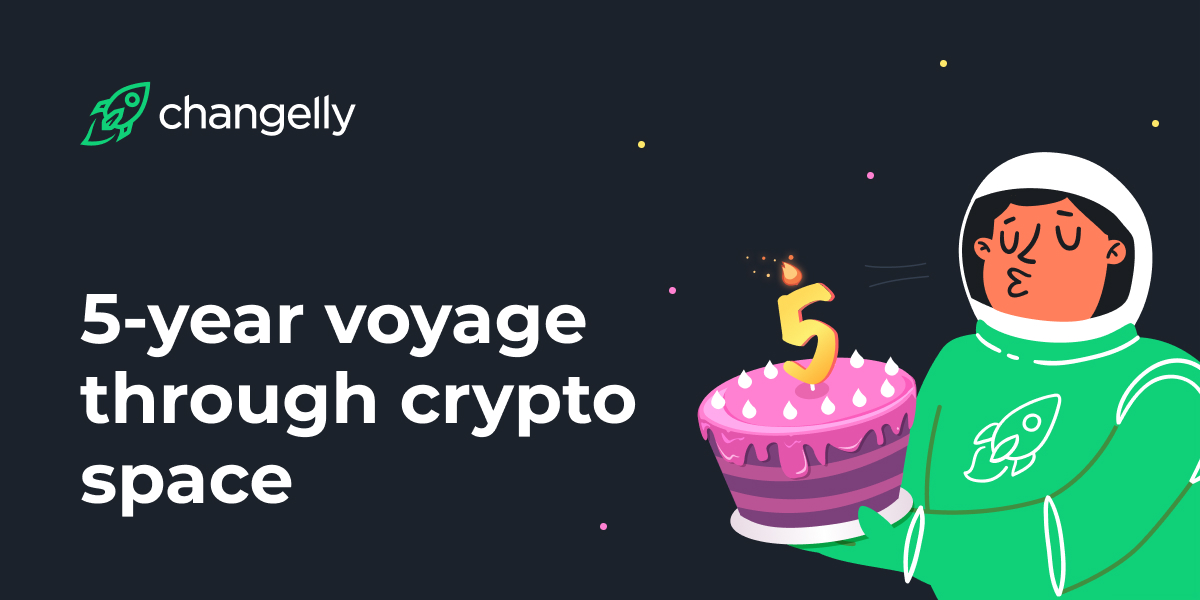 This month marks our five year anniversary here at Changelly and, in the midst of all that has been happening in the world, we would like to take a moment to look back at the progress we have made and celebrate the wonderful community of people that has provided the fuel for our journey in the crypto space. Starting April 10 — five years to the day from the launch of the Changelly rocket — Changelly will be partnering up with other companies in the crypto space to run a lottery with cool crypto presents. Read on for more details on the lottery and a trip through memory lane as we recount the crucial steps that got us to where we are today.

All the way back on April 12, 2015, a small team of five people, brought together by a shared belief in the potential of the emerging decentralized financial sector and in the necessity of the product they were developing, launched Changelly. In its original form, Changelly had 30 cryptocurrencies. From the beginning the vision was to expand the platform and the industry and to become as valuable a tool in the new, developing economy as possible. In order to achieve its goals, the Changelly team recognized that it had to commit to being a catalyst of mass-adoption for crypto.

The first year in action for Changelly saw the team hit the ground running to make their vision a reality for the crypto community. What that meant was backing as many projects that provided real value to the community — regardless of whether they were established coins or altcoins — and fine tuning operations on the platform.

At Changelly, the hard work started to really deliver results by the beginning of 2016. In January of that year, that Changelly rocket which started so small, turned into a legitimate spaceship as it became home for over 100,000 users. While it may not seem like much now, 100,000 back in those early days after just eight months on the market was huge and put wind in our sails. Changelly’s quick growth and loyal user base gave the platform what it needed to enter the stage as a significant and influential market player.

The following year, while continuing to grow, the Changelly team focused on cultivating an ecosystem capable of comfortably accommodating people with all different kinds of needs and wants. This is when the platform started to really become a unifier in the crypto space, playing the role of bridgemaker between advanced and new users and people loyal to different projects like USDT and QTUM, and providing a place at the table for all the different views and approaches that give this industry its boundary pushing diversity.

The ecosystem was shaped by introducing wallets and supporting a number of new tokens. Then in two moves that proved decisive to platform growth, Changelly partnered with Indiacoin and followed that up with a partnership with Simplex. These partnerships were crucial as they enabled Changelly users to buy crypto easily and quickly with Mastercard and Visa bank cards.

With these new additions to the Changelly ecosystem, the platform started to really take off the following year, especially in the wake of the great bull run of late 2017. To make sure everyone felt comfortable using Changelly, the team got to work with the goal of making the platform truly user-oriented. This translated into the launch of the 24/7 Changelly support chat — one of the industry’s premier help services — the development of APIs and the launch of the Changelly mobile app for Android.

In 2019, ecosystem development continued with an overhaul of the Changelly site and additional partnerships with major wallet services. As part of its site redesign, the Changelly team developed its Major Tom logo and started producing educational material via its new blog in order to increase crypto awareness. Additionally, towards the end of the year Changelly rolled out 7 different language versions of its site and service in order to better accommodate its global clientele.

All of this has brought us to where we are today. With that said, the one constant that has kept us going through all of this and without which none of this would have been possible is you, our users. So, as we take this chance to look back on the path we have travelled together to get to this point, we want to make sure that our users know how much we value everything they have done for us.